Over the next 40 years, more than $30 trillion will pass from baby boomers to Generation X and millennials.

It is generally considered to be the most significant transfer of wealth in American history.
For financial firms and their advisors, this transition represents opportunity — if they’re
prepared to win over this new generation of investors, that is.

At the time, It was the largest transfer of wealth in history, driven by an older population that was far more affluent and living longer than generations prior. The study also pointed to more complex, diverse family structures and the well-known differences between the spendthrift reputation of the Greatest Generation and the more freewheeling habits of baby boomers.

While these factors are still largely at play this time around, a whole new set of issues are creating challenges for advisors. Younger investors have a vastly different outlook on investing and aren’t afraid to abandon the relationships and tactics that define their parents’ financial strategies. Two-thirds of children fire their parents’ financial advisors after an inheritance, and the problem is growing. One recent J.D. Power study found millennials represent 55 percent of assets held by investors who are “at risk” of leaving their current firm.

The most successful advisors will tackle head-on four commonly held challenges associated with serving the next generation and turn them into opportunities for long-term growth. Download our commentary to find out what those challenges are. 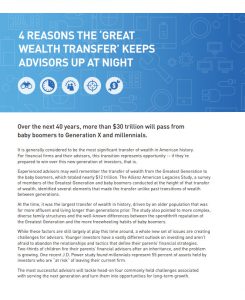 Be sure to follow-us on LinkedIn for more industry news and thought leadership content.